About the RISE award

"How important it is for us to recognize and celebrate our heroes and she-roes!"

The RISE award has been presented twice since the foundation of RISE. Below you can read more about the laureates. 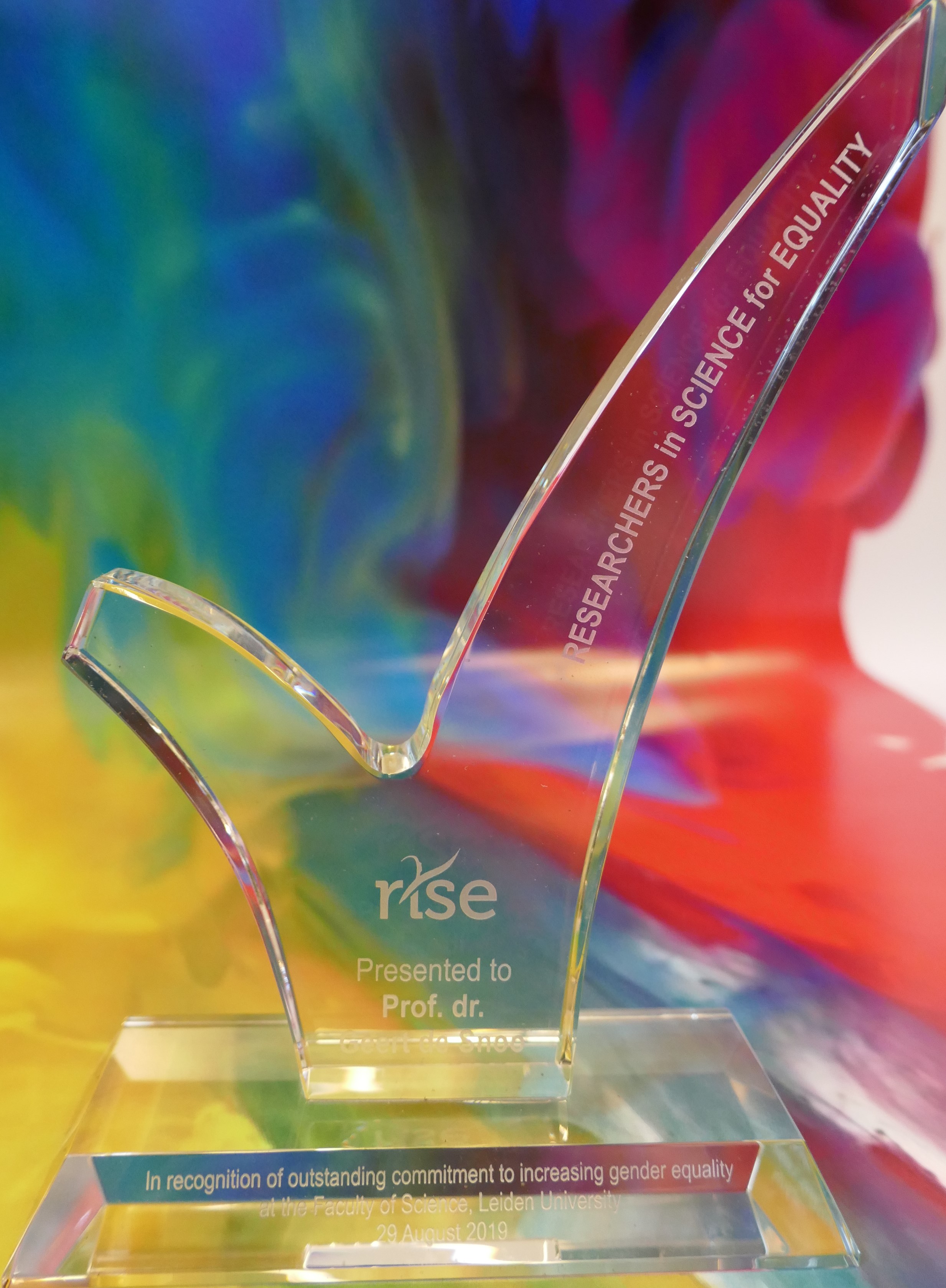 Emeritus Professor Jetty Kleijn received the 2022 RISE Award on 2 June 2022. She has dedicated herself in the past years to gender equality within LIACS and the Faculty of Mathematics and Natural Sciences. It is the first time since the introduction of the award that it is presented to a woman. 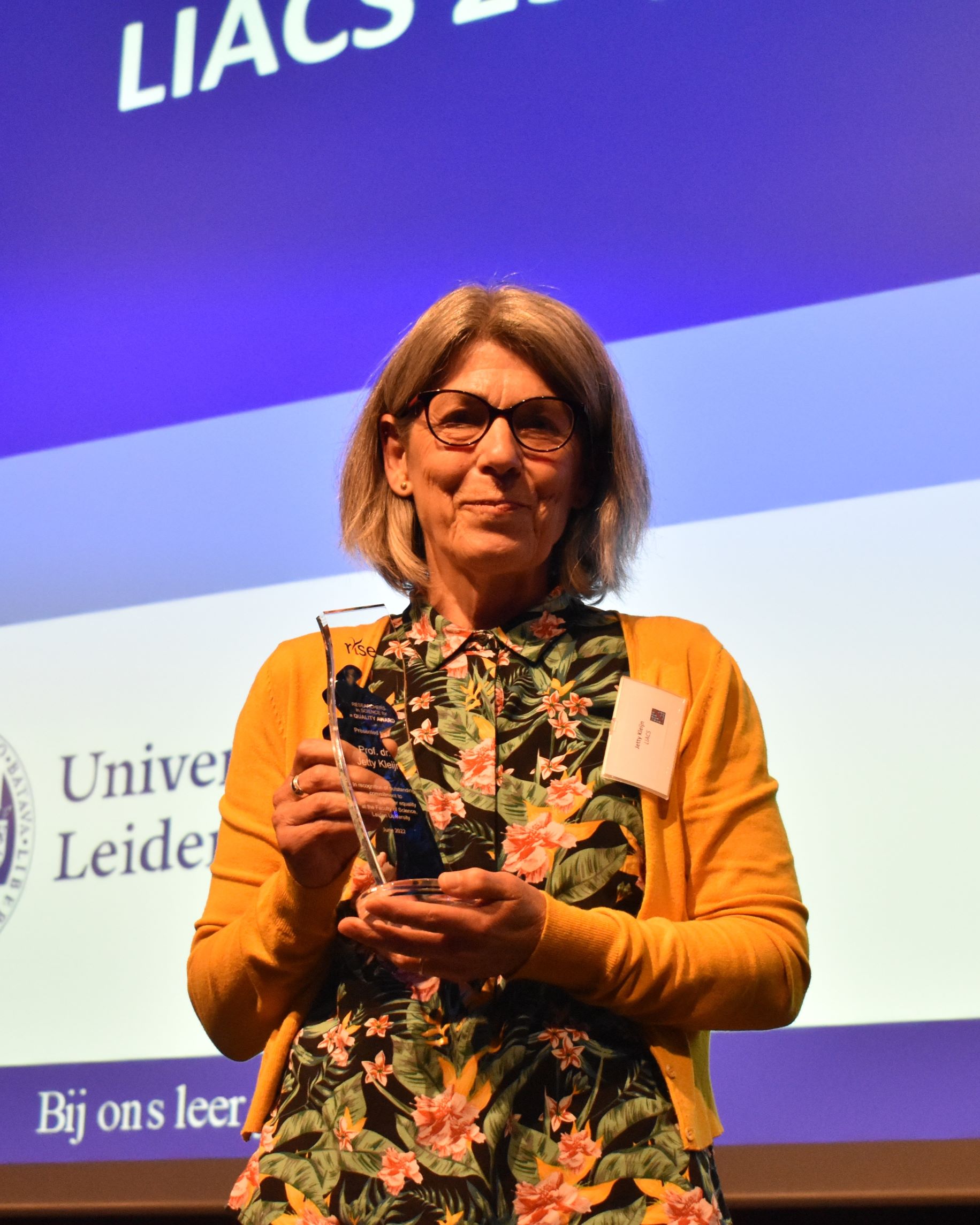 Jetty played a big role in launching several important initiatives to promote science subjects among girls in secondary schools. She was also committed to creating an inclusive, welcoming culture for female students and staff. In 2015, she also founded LIAXX: the female student and staff platform at LIACS, of which she was president from 2017 to 2020. Over the years, Jetty initiated and supported important activities, such as the Informatics Ladies Day, annual lunches on Ada Lovelace Day and International Women's Day.

Jetty Kleijn was also an active member within various networks of female scientists. For instance, she was a member of the Dutch Network of Female Professors, Sophia as well as RISE of Leiden University. She also represented LIACS in the Dutch ICT Platform (IPN) and participated in the IPN working group Equity, Diversity, Inclusion (EDI).

Prof. dr. Eric Eliel received the 1st RISE award during his farewell reception as scientific director of the Physics Institute on April 18 2018. 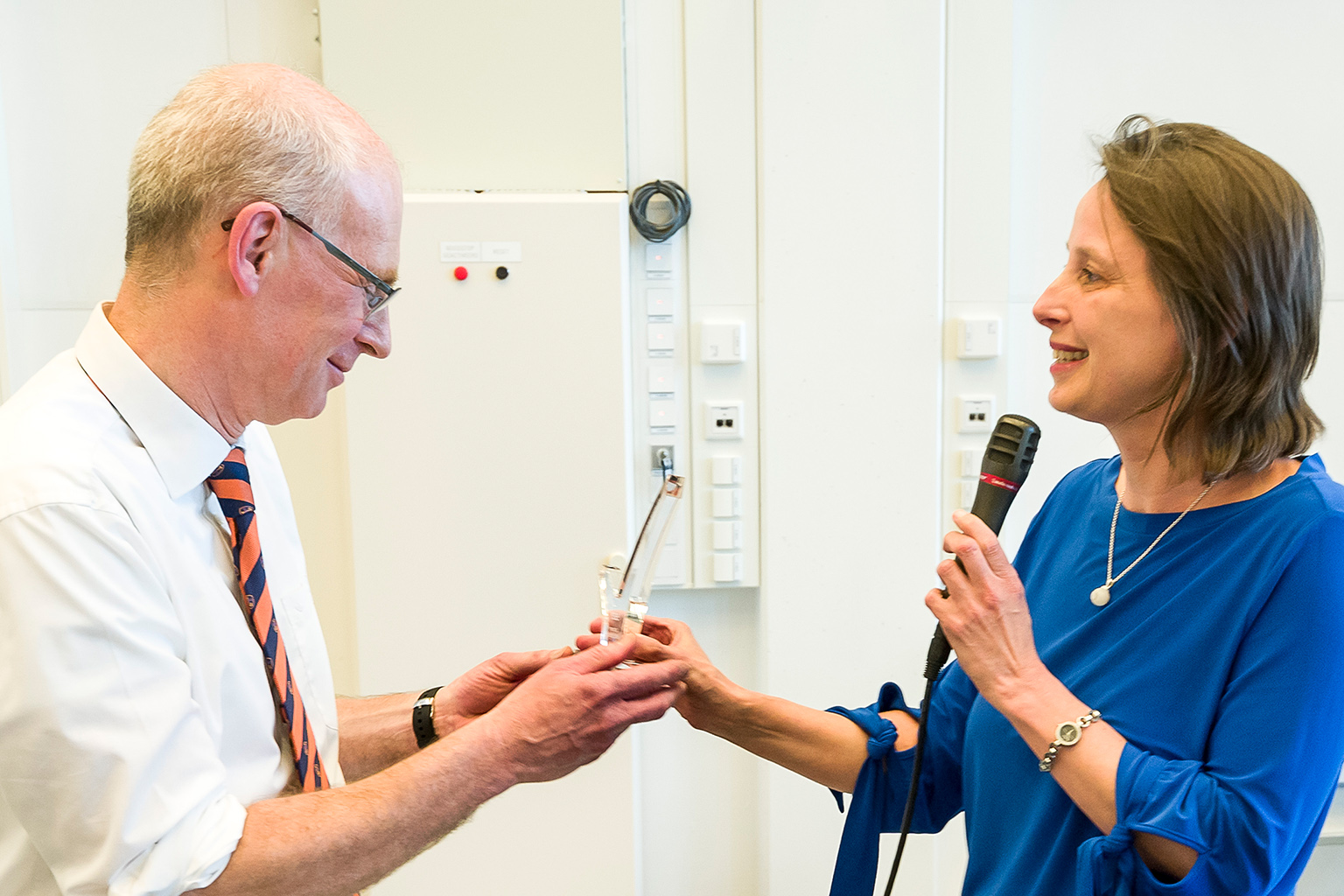 Prof. Eliel has been a supporter of RISE since the very start of the network. His dedication to increasing gender equality is illustrated clearly by himself in an interview on his term as scientific director:

"I set it as a goal to make LION the most female-friendly physics institute in The Netherlands. Of course this is not measurable, but it gives you a spot on the horizon. And it’s not even about the events you organize, like a women’s lunch or a day for women in science, but what matters is the message you keep conveying as director. I’ve heard from many people that this gives them the feeling that gender issues are taken seriously by the management, and that they find this reassuring.” 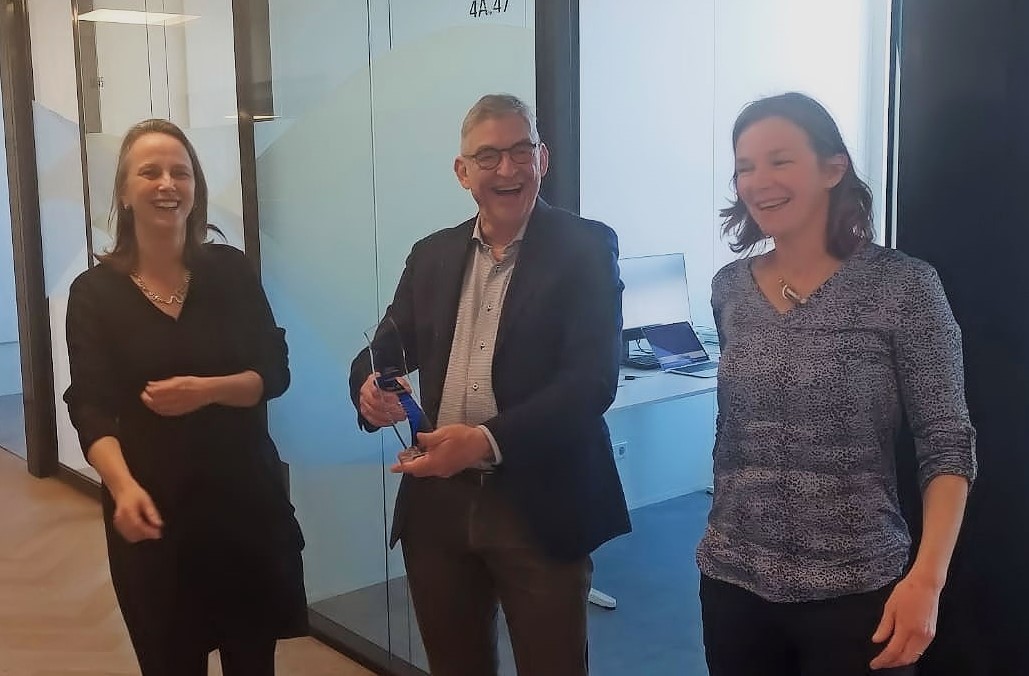 From April 1 to December 31, 2021, Prof. Wouters was acting dean at the Faculty of Science. In this short period, Paul has greatly increased the visibility of our women's network RISE and ensured that the importance of the network for diversity policy is widely recognized within the faculty. Through Paul's commitment, we got much better positioned to achieve our network's goals, including raising awareness of the importance of gender equality and helping build an inspiring work environment for female scientists within our faculty. We are extremely grateful to him for that, and for that he deserves the RISE award, a prestigious prize that is presented to people in recognition of their extraordinary commitment to increasing gender equality at the Faculty of Science at Leiden University.

Do you know somebody who deserves the next RISE award? Please contact us! 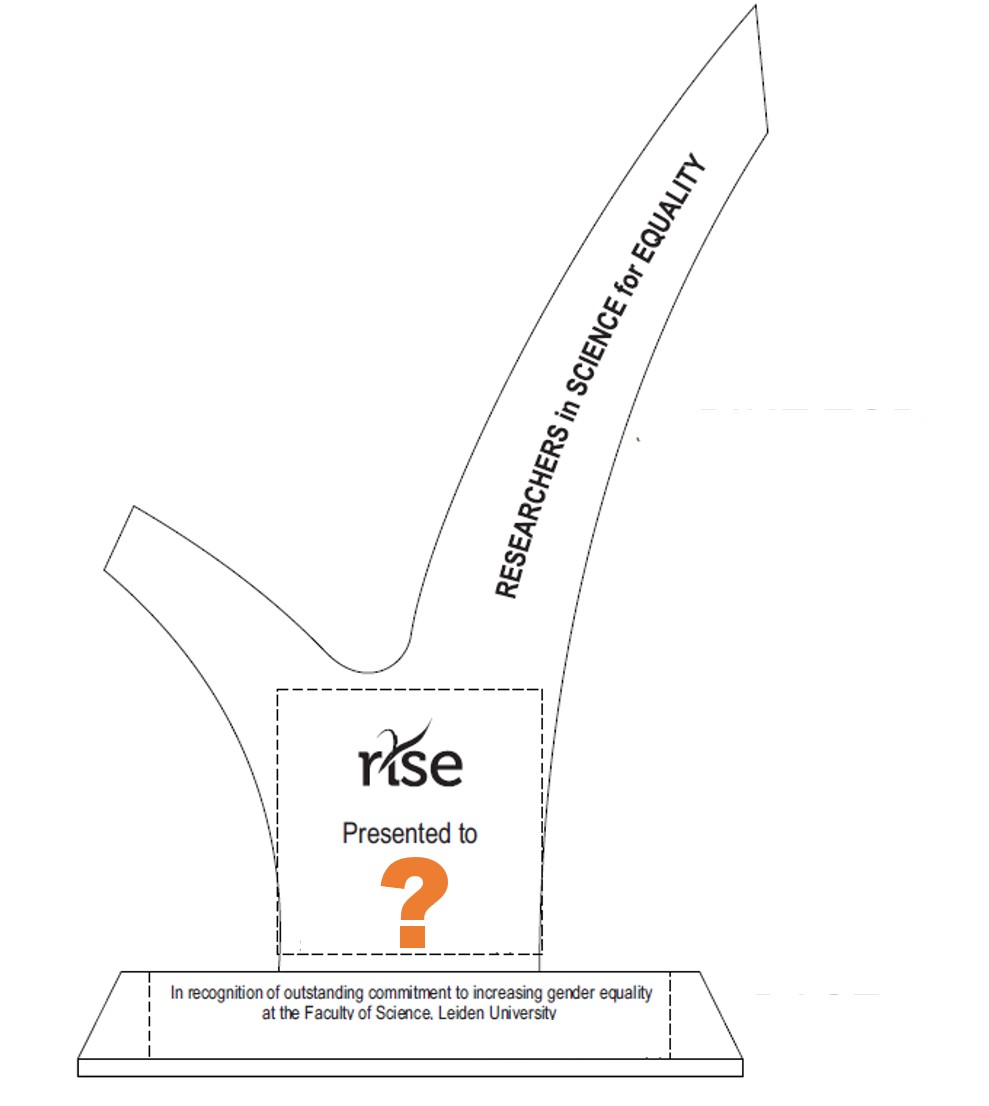 Nomination letters can be send to rise@science.leidenuniv.nl

Self nominations are not accepted.

Prof. dr. Geert de Snoo received the RISE award during his farewell reception as dean of the Faculty of Science on August 29 2019. 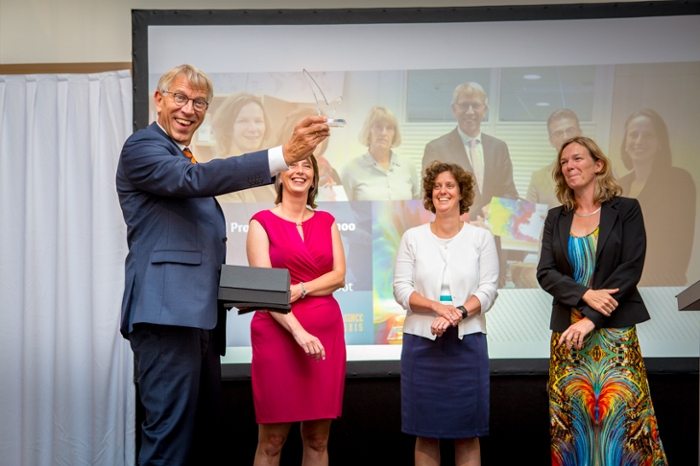 Prof. De Snoo played a major role in the initiation of our RISE network as he linked Martina Vijver and Miranda van Eck when they received their NWO ASPASIA grants to stimulate diversity. He not only stimulated the cohesion between female scientists at the faculty, but also took their advice seriously.  A few times a year the dean met with the board of RISE to discuss gender policy at the Faculty. Important issues were discussed, ranging from the amount of nursing rooms in the buildings to stimulation of a safe working environment or gender payment gaps. During these conversations RISE got to know De Snoo as a real people’s person “mensen-mens in Dutch”, who can listen very well and truly wants to encourage the diversity amongst employees.